If I were to ask you a question about ways in which you could reduce your carbon footprint online, how would you respond?

Many people who are posed this question find it a lot harder to answer because the internet does not have the physical representation that a recycling bag full of cardboard does for example. If you cannot see the effects of your actions then it is often difficult to appreciate that the changes you are making actually are benefiting the environment. It is now more important than ever to have an established internet presence than it is to have an established physical presence. To this end the internet has become the glossy storefront windows of businesses peddling their various services and wares. Common tactics include high resolution graphics, animated pictures and colourful banners. The sheer number of websites is growing at an astounding rate, for example at the end of 1985 there were six websites, fast forward to the end of 2013 and there were 759 million websites with a prediction of 2 billion websites by the end of 2015. While the number of websites has grown out of control so has the size of an individual website. Compared to ten years ago, the average website is fifteen times larger. For example, 830 million tonnes of carbon dioxide are needed to just keep the internet going per year and this figure will only rise; to put that figure into perspective the entire commercial aviation industry (that’s 16,000 aircraft) produces 600 million tonnes of carbon dioxide per year. But it doesn’t need to be this way… 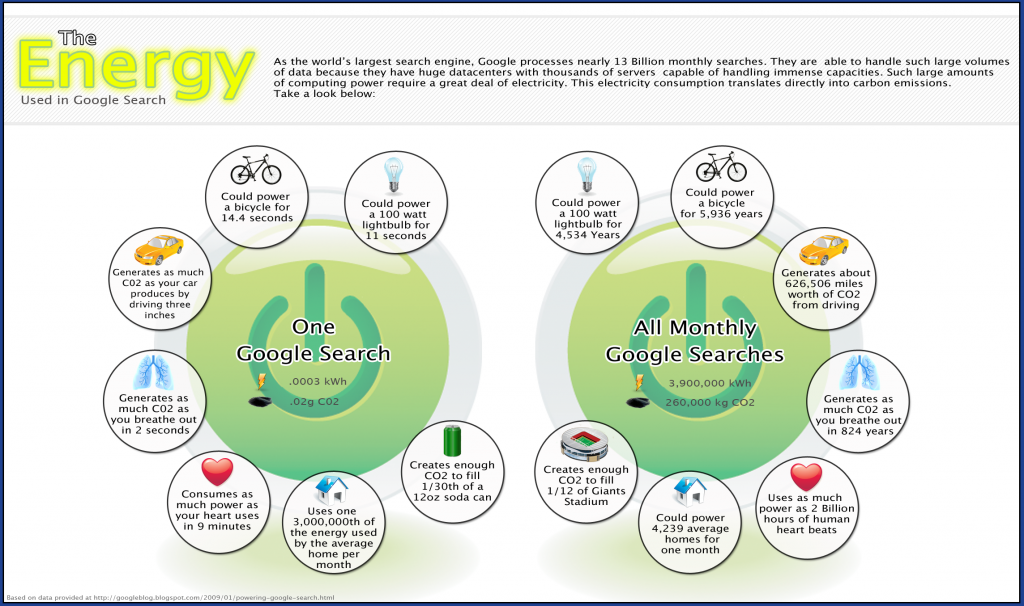 So what can you do to reduce this figure?

The reality is that reducing your online carbon footprint is just as easy, and may in fact require less effort, in comparison to more traditional and well known physical means of being more planet friendly. Taking up roughly 60% of the average website are images, by carefully selecting images which best communicate your message to customers you can both reduce your footprint and make your website load even quicker. A single high definition picture (1080p) is on average 3mb in size. An average video on YouTube is 10mb per five minutes at standard resolution. So let us assume for the sake of an example that your website has one high definition image and a five minute standard definition YouTube video, that’s a total of 13mb without text and any banners. If however you decide to display a picture in 720p and a standard definition YouTube video then your website will only total 6mb which requires just half the energy as before.

The act of reducing your online carbon footprint is really as simple as described above. For example, every 100 visitors to your eco-friendly website will save you 700mb of data; every 1,000 customers will save you 7 GB and 109 pounds of carbon emissions. That’s the equivalent of saving 5 gallons of fuel which will be enough to allow a 200 mile journey in a car doing 40mpg.

Let us now assume that you have optimised your website to make it as environmentally friendly as possible, what do you do now? The answer to this question is that you store it in a data centre which is powered by renewable energy. It is all well and good creating an eco-friendly website but if you store it in your average data centre then this heavily negates any benefits. For example, the average data centre uses the same amount of energy as 180,000 homes. So what can you do about it? An increasingly popular method of storing websites in an eco-friendly way is to use a carbon neutral web host such as Wunderism.  You can quickly see how making very small changes can begin to add up very quickly into a substantial difference. And these changes don’t just benefit you, removing unnecessary content will allow your webpage to load much faster which will make your customer happier and more likely to enlist your services.

Wunderism is a product of Leap. Design for Change who are proud to be a certified B Corporation since 2016. Using our business as a force for good.